A Little Sister's Dress for a little sister.

I love knitting for babies. It's quick and there are so many gorgeous patterns. I have a number of go-to patterns that I keep coming back to because the patterns are well-written and I've had great results - Jacki Kelly's Felix's Cardigan, annypurls' Peace Baby, Georgie Hallam's Rainbow Dress, and the Ribbon-tied Wool Vest from Erika Knight's Simple Knits for Cherished Babies.

But when I found out my little Sister was pregnant with a second daughter, I wanted to find something new. I settled on Tara Froseth's Little Sister's Dress, which I'd had my eye on for a while. 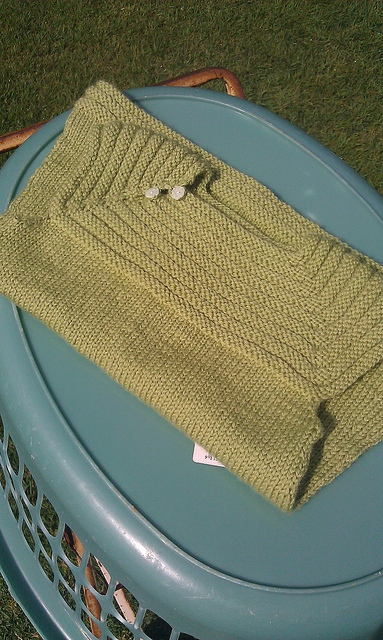 Pattern: Little Sister's Dress
Yarn: Luxury 4ply by Bendigo Woollen Mills
Colour: Leaf
Started: 26/09/11
Finished: 22/10/11
Buttons: faux mother of pearl plastic buttons in the shape of flowers, from one of those bags of mixed buttons you get at craft stores. 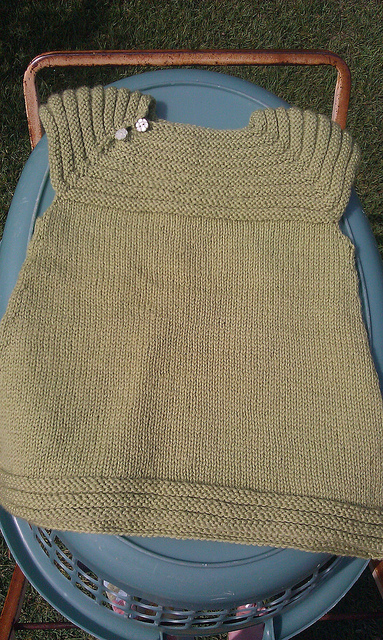 I loved this pattern, although I did find that the yoke seemed to take forever and I had trouble getting the button loops finished neatly.

Other thoughts - this pattern comes out rather large. My gauge was not exact but not that far off, so I expected it to be a little large, but this is a newborn size and the end result was about a 1year old size from other patterns. In fact, it is so large that it was rapidly appropriated by my 20 month old niece (the older sister of the recipient) and fits her quite nicely. It would absolutely swim on the little lady it was intended for.

Oh well, babies grow, and she will be able to wear it eventually. I just wouldn't recommend knitting this pattern without alteration if you want it to fit a newborn baby.

Nup. Not even close.

I was so confident yesterday that I had sorted everything out. I spoke too soon.

When I went back and re-read the page from Google, I realised that it wasn't that my blog was now on blogspot.com.au, it was that it existed on both domains and as an Australian reader of the blog, I would (randomly?) get sent to blogspot.com.au.

So the fact that I migrated all the comments to the .com.au domain blog didn't fix the problem. The redirect wasn't "flaky", it was ill-advised and a really crappy solution. DISQUS are looking for a way to deal with it, but I can't imagine there's a simple, sensible solution, and anyway, I'm not being redirected today so maybe Google have had problems and reconsidered.....

I found this blog this morning that has more of an explanation. I'm currently migrating the comments back to the blogspot.com domain and seriously considering migrating the whole blog to wordpress. :(
Posted by Lexy at 8:59 AM 1 comment:

By George, she's got it. Or, The day Google moved my blog to Australia.

It turned out I didn't have it all right after all. The comments had gone again by this morning and the only seemingly helpful piece of info I could find online suggested that I should ditch my custom blog template and start again from a standard one.

It worked, but only for as long as it took for me to work out that I was now back to standard Blogger comments and I had to reapply DISQUS comments. Once I'd done that, the comments were gone again.

So I sent a support request to DISQUS.

But later this afternoon, I realised that the blog seemed to be trying to redirect somewhere, and mostly failing. After a short while it became clear that it was trying to redirect from a .com domain to a .com.au one. A little bit of searching turned up this little chestnut from Google. . It looked likely that Google had moved my blog to a .com.au domain sometime after I started this exercise.

It took a little bit of extra work, and a bit of fiddling around with the DISQUS "migrate threads" feature, but I think all the comments have turned up now. The redirection seems to be a bit flaky though, and sometimes it stays on the .com version, where the comments won't appear. Everything else seems okay there though. So if you're stuck in .com land with no comments, try this link to my "Australian" site.

Oh, and I think I will stay with the new look for the moment. I quite like the blue. What do you think?

Oops, I think I may have made a mistake

So I did a bit of a search and saw that a lot of people were using DISQUS. All the instructions on the DISQUS site seemed simple, so I took the plunge.

Install DISQUS - fine, now to import comments into DISQUS and sync back....well that part seems to have got halfway and stopped. All the comments have disappeared from here and don't seem to have made it into DISQUS. There is a happy little status message saying that my import has completed successfully and imported 100 comments, but the progress percentage is stating 0.0% and the comment list there has no comments in it.

I will leave it for a day or so to see if it repairs itself and then try removing DISQUS.

But in short, I'm really sorry. Your comments are immensely valuable to me and I feel really awful that they have just disappeared!


[Edited to add] - I panicked too soon. Turns out I just had to wait and now everything is back. (and here I was not trusting the technology. I may have to hand in my geek badge!)
Posted by Lexy at 1:27 PM 1 comment:

No bones about it.

We went away for a week and a half from the 24th of December. Drove to Sydney to spend 5 days with my family, then out to Orange to have New Years with the Man's Aunt and Uncle, and came home up the Newell Highway, with a day at Western Plains Zoo on the way. The Man wanted to take his car (which makes sense, as it's larger and much more comfortable to travel in than my tiny hatchback) and as it's a manual, which I'm not licenced to drive, it meant I was going to get a lot of time in the passenger seat. A lot of knitting time.
Knitting for the trip down was pretty much sorted, as I was attempting to finish a One Row Lace Scarf (rav link) for my Grandma for christmas, but I needed a project for when that was finished.
I'd recently bought two skeins of beautifully dyed worsted merino from the lovely Helena at The Good Sheep, so I set about finding something nice to make with them. I finally settled on Saroyan (rav link), a simple scarf with a leaf edging, knitted side-to-side with the edging knitted as you go, named for Dr Camille Saroyan from the TV series "Bones". I started out with the recommended 6mm needles but got too loose a gauge and the knitting looked flabby and awful. I switched to 5.5mm needles and got the recommended gauge. 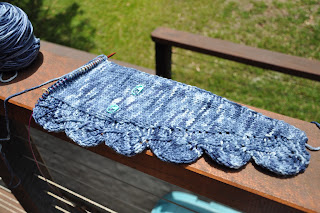 I've done 4 increase sections rather than the recommended 6 as I thought it was wide enough for me by that point. I didn't really like how it was turning out at first, but it is starting to grow on me. I think I might make another one later, but I will use the alternate leaf edging I found on ravelry as I think it looks prettier. I've got some yarn leftover from the cardigan I made for Grandma last year that I'm thinking of dyeing myself. 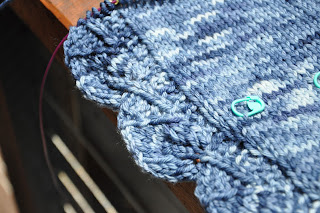 And here, just for the complete adorable-ness, is a photo of one of the meerkats at Western Plains Zoo. It was worth the price of admission just to see them! 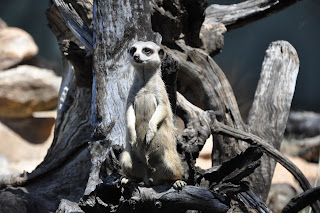 I'm baaaack! (at least for the moment)

I've always found it a bit tricky when coming back to the blog after an absence. I've come to accept that there are times that I just don't feel like writing, so there are going to be gaps, but after a while I want to write again, and I start mentally composing blog posts and then I stop.....
Herein lies the dilemma. Do I ignore the fact that I've been away, and just post like I was never gone? Do I draw attention to it? Do I try and explain why I didn't feel like posting? Is anyone reading anyway? Does anyone care?
I don't have a good answer.
While I was away, we had family stuff, and issues at work (mostly due to challenges with recruiting which resulted in my team never being at full strength). I had colds and flu and the most severe crohns flare I've had since I was diagnosed. I've been tired and grumpy and depressed and angry (although not necessarily all at once and certainly not all the time).
I've been knitting, and not knitting, and spinning and not spinning, and I have been writing, just not anything coherent or long enough to feel comfortable publishing to the blog. I've written things that would have been fine if they had photos to go with them, and I've had things that I wanted to say but didn't say them before the moment passed.....
In short, life happened. As it has a tendency to do.
But I think I'm back now, at least for the time being. I'm certainly feeling the desire to write for the blog more strongly than I'm feeling the barriers.
And I've got a nice new knitting project.....if only I had a photo of it handy!
Posted by Lexy at 12:08 PM 2 comments:

Lexy
Brisbane, Qld, Australia
I'm a 40-something IT development team lead. Welcome to a place where I talk about knitting and my family, and the reality of living with Crohns Disease.

Find me on ravelry

Where am I up to?