Fever....In the morning, fever all through the night.

Everything started out well yesterday. We got The Boy all packed up and drove him up to his Grandma and Grandpa's place near Caboolture, and then took him round to play with his cousins at Sandstone Lakes. We drove The Boy's cousin and his girlfriend (don't worry - large age range in cousins - the one in question is 22) down to South Bank and then came home to get ready for Leisl and Nick's wedding.

We got dressed and ready and the taxi arrived on time and we reached Somerville House with half an hour to spare. We looked at the map and decided that the best way round to the chapel was along Vulture St. When we got there we found that the chapel, while indeed on Vulture St, was high above the street and we couldn't see any way to get there, except a footbridge over the railway line, around the corner. Around the corner we couldn't find any way onto the bridge that wasn't locked, and had to walk back around, at which point we found that a gate below the chapel was open. That little adventure chewed up 20 minutes and left us both a little hot and bothered. (The Man more than me - his black suit had to have been much hotter than my strapless dress, even if the lined synthetic satin made it feel by that stage a little like wearing a shower curtain).

Anyway, we were there with plenty of time before the Bride arrived, for a lovely service.

After the service we walked to the nearby building where good friends have a riverside apartment. They had booked the poolside bbq area for us to all have a few drinks and nibblies before catching the ferry across to the reception. 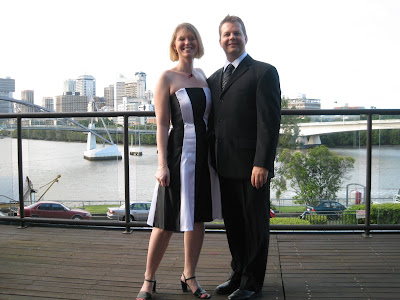 The reception was nice, but, early on at least, there was a little too much alcohol and not enough substantial food. (I suspect that's a hazard of cocktail receptions) I ended up having a little bit too much to drink and having to miss the Bride's speech (sorry, Leisl, The Man tells me it was really good!) To cut a rather unpleasant story short, The Man decided we would have to go home early, I composed myself long enough to get home in the taxi and we were home by something like 9.30pm.
The phone rang at 3.30am, when I was still alcohol-affected enough to take a little while to work out what that ringing noise was so that I could fumble for the handset. It was The Boy's Grandma - he had woken up with a fever and a headache, coughing up blood. The Man told them to call an ambulance.
So it was a little bit panic stations for us this morning, getting ready to drive up to Caboolture in the middle of the night, me feeling absolutely awful, The Man trying to work out how long it was since his last drink, and whether he would really be okay to drive. (in a way, thank goodness we'd come home early, he never would have been okay if we'd been out partying until 2am).
As it turned out in the end, The Boy had a nasty fever and wasn't feeling very well at all, but the blood (on the pillow, and assumed to be coughed up) had actually come from a wound he'd scratched in his ear. He refused to go in the ambulance and so the paramedics stayed with him until we arrived and left him in our care. He slept until about 6.30am and then insisted we go home, so off we trotted back into Brissy, me feeling only slightly better than I had three hours previously.
Quite understandably, we spent the rest of the day at home resting. I've felt seedy for most of the day but I'm just tired now, and The Boy's fever's spiked a couple of times during the day (40.1 at one point) but he seemed to be okay when he went to bed.
About the only other thing that happened today was that I lost $13,000 playing poker on Facebook. Thank goodness it's pretend money. I think that has proven that I have no skill at poker and virtually no luck either. Don't ever set me loose at a casino. Please.
Posted by Lexy at 9:22 PM 1 comment:

A serious case of blog-block

I've been really busy. Work has been really really hectic, and I've been getting home and collapsing. I've had a nasty chest cold for the last month or so, and while I got over the first few days of feeling so awful I couldn't sit up for more than 5 minutes straight, I haven't been able to get rid of the last vestiges of congested chest and nasty hacking cough. Lovely.

Those of you interested in the knitting content may be expecting lovely photos of a finished Eyelet Cardi. Well, .... sorry, but I've had a serious case of cardi-block to go along with the blog-block. I got as far as the bit where I have to pick up stitches to do the front and neck bands and I stopped. Actually, I started to do one of the front bands and it looked awful so I stopped. The poor cardi is still floundering and feeling unloved in the knitting drawer.

But that doesn't mean I haven't been knitting. Oh no. I needed something to take my mind off the fact that I would have to go back and finish the dreaded picking-up stitches at some point, so I've made two bags and a shawl. 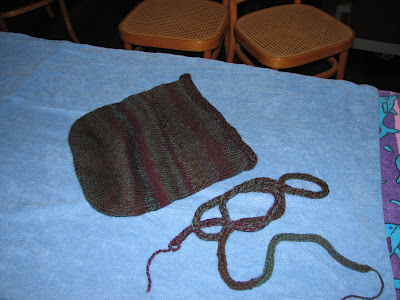 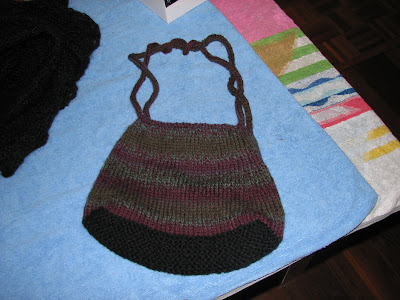 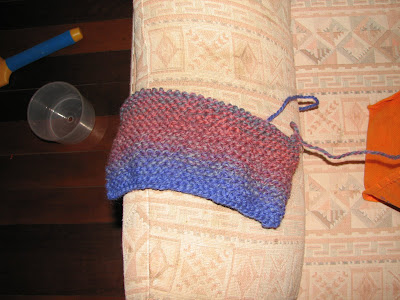 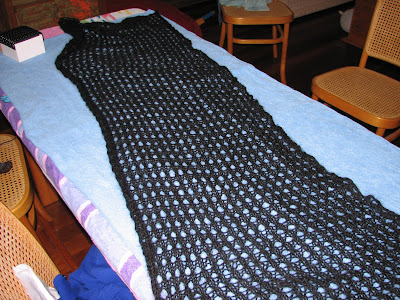 This was my first experience of knitting a shawl - indeed my first experience of knitting lace on anything bigger than a bootie. Of course,I completely cheated. I needed this in a hurry for a wedding this afternoon so it's probably the most basic shawl pattern in the universe: cast on 50 stitches, knit 1 row, purl 1 row, *k1, yo, k2tog to last stitch k1, p1row, k1row, p1row, repeat from *. I used the tubular cast on and a cast off I got from Grumperina's blog, here. (see under the first two photos of socks on feet). Oh - It's made out of nearly three skeins of Cleckheaton Studio Mohair, in black, and it was 180cm long when I cast off. It came out to shorter than that after I blocked it as I stretched it out sideways quite a bit. It started out narrower than I wanted it.

Unfortunately it's too warm now to wear a shawl, and probably will continue to be so for the rest of the evening. I'm going to take it with me anyway, The Man says that I'll be really annoyed if it does get cooler and I didn't take it, and he's probably completely right.

Okay - time to finish getting ready - first thing is to clean up my toenail polish. My standard way of polishing my toes goes like this:

1. Slop polish all over toenails, not caring too much about whether what you're getting polish on is toe or nail.
2. attempt rather inexpertly to clean up the dreadful mess you made in step one.

As you can see - I'm between steps one and two. 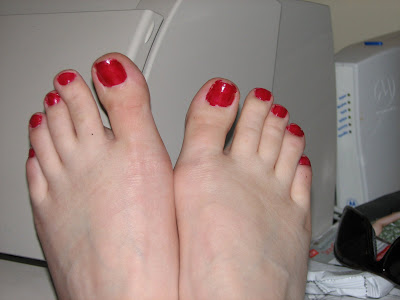 Happy easter everyone!
Posted by Lexy at 12:34 PM No comments:

Lexy
Brisbane, Qld, Australia
I'm a 40-something IT development team lead. Welcome to a place where I talk about knitting and my family, and the reality of living with Crohns Disease.

Find me on ravelry

Where am I up to?